Statewatch produces and promotes critical research, policy analysis and investigative journalism to inform debates, movements and campaigns on civil liberties, human rights and democratic standards. We began operating in 1991 and are based in London.

Statewatch is a UK registered charity and is funded by grant-making trusts and donations from individuals. You can support our work by making a donation.

If you are interested in contributing work to Statewatch, please see here. 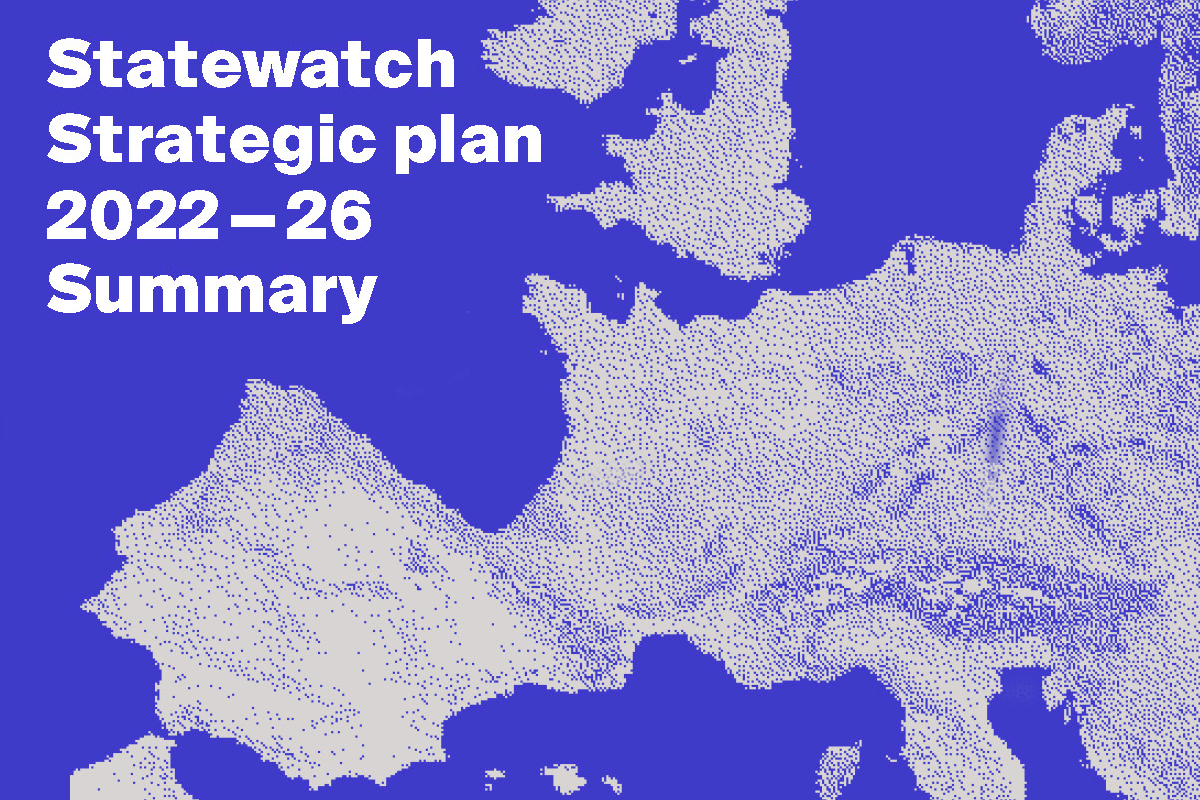 To monitor, analyse and expose state activity that threatens civil liberties, human rights and democratic standards in order to inform and enable a culture of diversity, debate and dissent.

At the beginning of 2022 we adopted a new five-year strategic plan based around three overarching themes:

You can read a summary of the strategic plan here (pdf).

Our Observatories bring together legislation, draft policies, analyses, media reports, critiques and campaigns about specific issues such as freedom of information and asylum.

Reports on civil liberties, EU and national policies and practice mdae up of own work and key material from other sources.

In-depth examinations of key issues in the fields of migration, policing, secrecy, surveillance, privacy and more.

We engage in research projects investigating key civil liberties issues and finding ways to resolve them. In recent years we have worked with the EU Justicia Network, observing EU standards on procedural rights and rights of victims of crime; the SECILE project, gathering and analysing all the EU's adopted counter-terrorism measures since 2001; undertaken media analysis of asylum and refugee stories for the Ethical Journalism Network; examined the transparency and accountability of EU agencies; and investigated the growth and development of biometric identity initiatives in the EU.

The Statewatch European Monitoring and Documentation Centre (SEMDOC) tracked every measure, proposed and adopted, in the field of EU justice and home affairs policy from 1993 to 2019. It contains a legislative observatory of past, current and future JHA measures.

The Justice and Home Affairs Archive is a unique online collection of over 9,000 official EU documents (1976-2000) charting the development of EU justice and home affairs policy.

All the material we have published since 1991, including Statewatch News, the Statewatch Bulletin/Journal and the State Research archive alongside official reports and documentation, analyses, links and more. We currently hold over 35,000 items.

Our hard-copy archive has been gathered over 40 years and holds unique materials from national and local activism across Europe in pamphlet format, from Roneo to lithographic publications, plus key books ranging from the 1920s onwards and many hard copy EU documents which predate the EU’s digitisation of its records. Many of these materials are unique.

we organise occassional seminars and workshops to launch projects, present our work and to discuss pressing civil liberties issues.

A twice-yearly newsletter just for Friends of Statewatch.

Accessing and broadcasting our work

Statewatch has received seven awards for its work:

A wide range of individuals and groups have praised our work:

As well as working with our contributors group, Statewatch works with a wide range of other organisations. We are a member of and work with:

We have also collaborated with a range of groups and organisations on particular projects and reports:

Our staff and trustees

About our staff, volunteers and trustees.

Get in touch with us.

Our work is regularly featured in the press in Europe and beyond.

How we are funded

We welcome the submission of material for publication.

We are available to work with other individuals and organisations.

Our collection and usage of personal data and your rights.