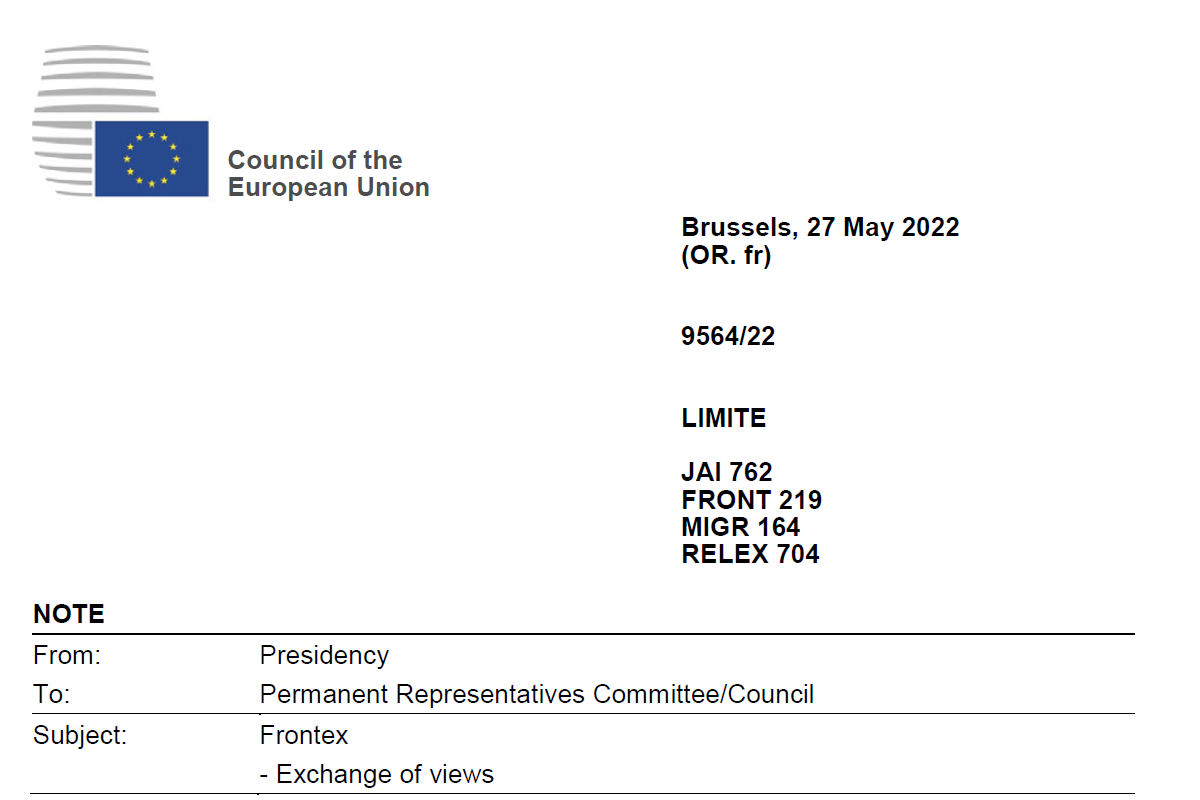 On 27 May the Council Presidency issued a paper to the Permanent Representatives Committee (COREPER) and Council (pdf) on an exchange of views to be held on Frontex, to “take stock of how the well-resourced agency can respond effectively to the needs of Member States at the EU’s external border.” Describing Frontex as “indispensable for the proper functioning of the Schengen area,” the document presents the view that “the strategic aspects of its governance must be closely linked to the political debates taking place in the Council and the European Council.”

Ministers are invited, ahead of the 10 June meeting, to present views and analyses on:

A tricky passage of the paper comes under the heading “support to member states”. The presidency recounts Frontex’s operation under the framework of EU law and the law of host member states, before focusing on member states’ right to safeguard public order alongside safeguarding border security. To link these concepts, the presidency imagines “situations where third-country nationals violently force their way into the territory of a Member State”. This right must be balanced with proportionate measures that respect fundamental rights and allow “real and effective access to regular entry opportunities”.

It remains up to the agency to train staff and organise its activities according to this legal framework, and in this regard the presidency points to the fundamental rights monitors. The paper states that 33 out of 40 that the agency was oblige to appoint by the end of 2020 are now in post. The agency itself has stated on Twitter that the Fundamental Rights Officers staff now reaches “over 40”, with 65 expected in post by late 2022, though when asked for clarification the Frontex press office confirmed to Statewatch that "there are 31 monitors and 11 other members of the staff, who does work similar to monitors [sic], but have partly other profiles".

The wording of this passage and the insistence on Frontex as "indispensable" sit alongside recent descriptions of Frontex as "the most important agency" (in the words of migration and home affairs Commissioner Ylva Johannson), and suggest that this exchange of views is not designed to discuss the need for culture change in the agency due to findings of mismanagement, or its involvement in fundamental rights violations.

The paper predicts increased use of pre-existing migration routes through the impact on food markets of the conflict in Ukraine, as well as the increase in humanitarian need directly related to the conflict. It imagines Frontex’s role primarily as providing “essential” and “much awaited” contribution to the European return policy, and supporting the implementation of the Entry/Exit System (EES) and the European Travel Information and Authorisation System (ETIAS).

The paper reviews the steadily increasing staffing levels of the standing corps, reflecting that both the agency and member states now carry additional obligations to identify and retain a large pool of staff, as well as to ensure management, training and deployment of that staff. Covering the new powers awarded to the agency in 2019, the Presidency also reminds representatives that the Regulation foresees an evaluation by the Commission in the first half of 2023, and that the quota of existing and potential needs can also be reviewed under Article 59.

The presidency suggests that attendance by Frontex's executive director at COREPER meetings will provide political guidance to Frontex through “concrete and strategic discussions”. An interim executive director, deputy executive director for standing corps management Aija Kalnaja, was appointed by Frontex’s management board at an extraordinary meeting in April at which former director Fabrice Leggeri resigned, thereby avoiding disciplinary action following investigations against him by the European Anti-Fraud Office (OLAF).

A new chairman of the management board, Alexander Fritsch of Germany’s Federal Police Headquarters, was appointed on 26 April 2022. On 3 February, at an informal ministerial meeting held in Lille, where the level of member state representation and commitment in the management board was identified as “an issue of utmost importance.”