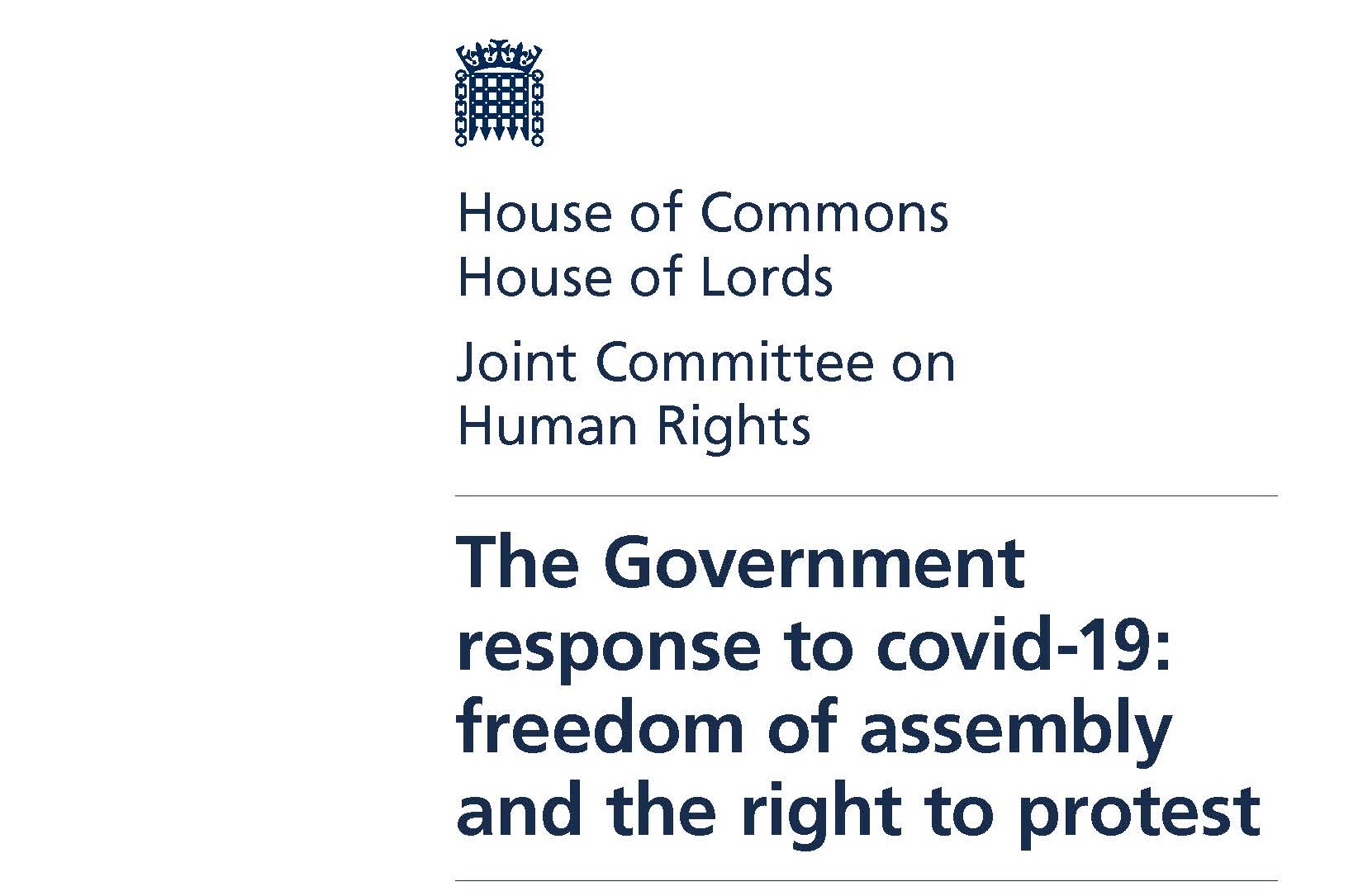 Proposed changes to the lockdown rules due to come into force on 29 March would include an exemption for protests, provided that the protest in question is "organised by a business, a charitable, benevolent or philanthropic institution, a public body or a political body," and "the gathering organiser takes the required precautions in relation to the gathering" (see page 30 here, pdf).

This reflects, broadly speaking, amendments proposed in the JCHR report.

The report criticises the government and police's handling of protests during the pandemic, looking in detail at Black Lives Matter, 'defending memorials', anti-lockdown and Reclaim These Streets demonstrations.

In particular, the report notes that:

"while the law surrounding protest during the pandemic has been and remains far from clear, this does not justify inaccurate and misleading communications from Government...

Numerous communications from public authorities implied or stated that protest was illegal, while in court Government lawyers argued the opposite. Even when properly understood, the lockdown laws leave the right to protest dependent on interpretation of the highly subjective “reasonable excuse”. This is unacceptable and leaves the public unsure of their rights, and at risk of arbitrary or discriminatory decision-making."

See the full report: The Government response to covid-19: freedom of assembly and the right to protest (pdf)

The text below is a press release published by the JCHR on 17 March 2021.

UK: Protect the right to protest during lockdown by putting it on the same footing as communal worship, says Joint Committee on Human Rights

The right to protest in England during the lockdown should be made clear by putting it on the same footing as the right to picket and the right to take part in communal worship, say Members of the Joint Committee on Human Rights.

In a new report, The Government response to covid-19: freedom of assembly and the right to protest, the Joint Committee calls on the Government to bring forward regulations to amend the law to make it clear that protest is permitted if conducted in a manner that reduces public health risks to an acceptable level. The report includes draft legislation which would have this affect.

Gathering to protest is not, and never has been, completely illegal during the pandemic - even under lockdown. The Government provided a general prohibition on gatherings coupled with a list of lawful exceptions. Under the current lockdown, the exceptions do not include protest.

Nevertheless, the right to protest safely has to be accommodated within the general defence of ‘reasonable excuse’ to ensure that the law is compatible with the Human Rights Act 1998 and the right to peaceful assembly under Article 11 of the European Convention of Human Rights.

This ‘confusing ambiguity’ in the regulations governing gatherings has been the position in all three lockdowns over the past year, says the Report, leaving the public unsure of their rights and at risk of arbitrary or discriminatory decision-making. Ambiguous or confusing law presents a challenge to those who are required to enforce it and could lead to interferences with human rights that do not have a proper basis in law.

The Committee has published draft Regulations that would guarantee the right to protest in public outdoor places, if done safely, by putting protest on the same footing under lockdown restrictions as picketing and communal worship. Under lockdown, as long as the ‘required precautions’ are in place, people may gather for communal worship in England, in line with the human right to freedom of religion under Article 9 of the ECHR. An exception to the ban on gathering also exists where the gathering is for the purposes of picketing as long as the organiser takes the ‘required precautions.’

“The right to protest is important and should be allowed, like other current exemptions, if it is carried out in a safe way. When people have to go to Court to establish whether their actions are lawful or criminal, as has happened most recently in the Reclaim These Streets Clapham vigil, it’s clear that the law is in a mess.

“The Joint Committee called for evidence on the human rights consequences of lockdown, including the right to protest, in November last year and heard evidence on protests in February. The events of last weekend show clearly how the lack of clarity and level of uncertainty in the law is unacceptable and must be remedied as a matter of urgency.  This could be done right away as the Joint Committee on Human Rights has drafted the Regulations.”