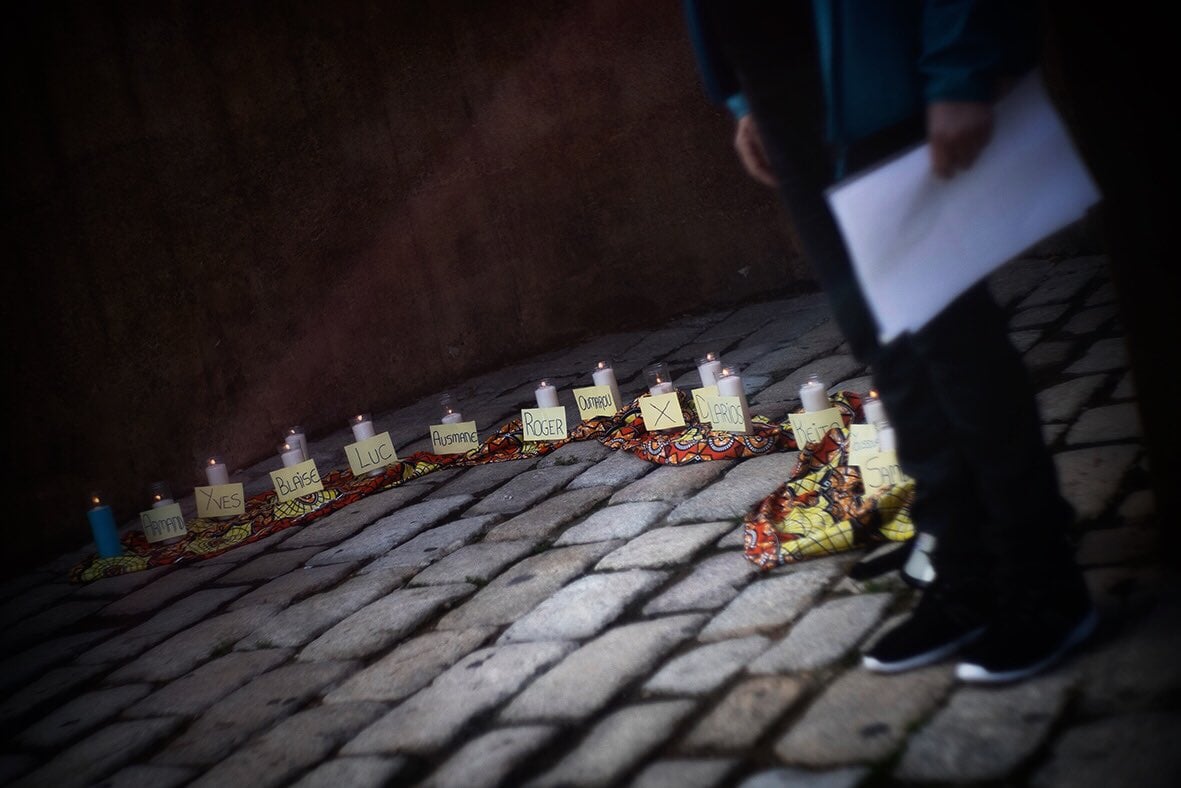 The episode known as the Tarajal case saw 200 people attempt to reach the Spanish enclave of Ceuta, which is located in North Africa and borders Morocco.

Fifteen of those who tried to swim to Ceuta drowned as Guardia Civil officers fired rubber bullets and tear gas to halt their journey, while 23 people who did make it to Ceuta were immediately expelled to Morocco in what is referred to in Spain as a ‘hot return’ (devolución en caliente).

Last July, 16 Guardia Civil officers walked free from a court in Cádiz, southern Spain, after a ruling that said there was insufficient evidence to prosecute them for involvement in the deaths.

The manifesto put together for this years' demonstrations - for which hundreds of organisations, including Statewatch, expressed their support, see the list below - recounts the human cost of European border control policies and calls for a change in political priorities. The full-text is reproduced below (in English, also available in French and Spanish as pdfs).

After seven years of litigation, the current situation is far from hopeful. On 27th July 2020, the Provincial Court of Cadiz dismissed the case, declaring that the investigated Civil Guards had not committed any offence. Therefore, they have been acquitted without a trial. The appeal against this decision is still pending until it is resolved by the Supreme Court of Spain. Seven years later: dead people remain faceless, graves remain nameless, victims remain without justice and borders without rights.

2020 produced shocking statistics. Due to the tightening of border controls and deadly policies of the “fortress” Europe, a growing number of people are losing their lives trying to reach our country. According to Walking Borders reports, despite 2,170 deaths being recorded on the access routes to Spain, it is estimated that 95% of victims go missing and their bodies are never found. As we haven’t been able to save their lives, we should be held accountable for their deaths.

However, instead we continue to perpetuate the entire political machinery which finances the fight against irregular migration. During Fernando-Grande Marlaska’s term of office, the budget allocations set aside for coast guards and border police in countries such as Morocco, Mauritania or Senegal, among others, have been tripled. What if these resources were allocated to welcoming migrants instead of rejecting them?

Far from being a deterrent, these efforts to hold back migratory flows have forced them to divert to other deadlier routes, such as the Canary Islands route. It’s a much more complicated, more expensive and dangerous route, whose embarkation points (Gambia, Senegal and Mauritania) are moving ever further away. Therefore, migrants are exposed to adverse weather conditions and sea storms. Those who survive this journey are denied their right to speech and to peace as the human rights violation continues once they reach port. They have been deprived of their freedom, kept in overcrowded conditions, in some cases with no access to legal assistance and thus no chance of defending themselves and children have been separated by force from their relatives.

There are many reasons that lead people to migrate: the search for international protection as they flee from a country in conflict as well as the economic crisis and the pandemic. This has led to the emergence of "mixed migration flows". The European Union loots African countries through fisheries agreements and, as a consequence, it violates food security and human rights and widens the economic and social gap. The situation has worsened due to the Covid-19 crisis, which has affected all economic sectors in those countries but especially tourism. However, even if some people flee from conflict and others from the lack of future prospects, we shouldn’t discriminate between refugees and migrants as if only the former had the legitimacy to migrate.

This side of Europe is shameful. A “fortress” Europe that builds walls and fences to separate us. A Europe that plunders, expropriates and hoards the wealth of countries of the Global south but that prevents people who’ve been left with no resources from reaching our territory. A hypocritical Europe that externalises its borders by financing third countries so they can watch over their walls.

● We condemn the deadly policies that have turned the Mediterranean and the Atlantic into the biggest mass grave in the world.
● We condemn the construction of a 10m high fence at the borders in Ceuta and Melilla, which prevents anyone from attempting to reach those cities overland and forces them to take more dangerous routes such as via the Canary Islands route.
● We condemn externalisation policies at borders which turn us into accomplices and financiers of the abuse against migrants committed by third countries such as Morocco.
● We condemn fast-track and express deportations, inhumane practices that infringe upon people’s dignity.
● We condemn that over the last few months deportations on commercial flights to Morocco, Mauritania and Senegal have been reintroduced. These practices infringe upon rights recognised in our legislation.
● We condemn the hate speech against migrants which fuels racism and xenophobia and encourages rejection instead of welcome in our society.
● We condemn the lack of humanitarian aid and resources to receive migrants which results in an increase of deaths at sea as well as deplorable conditions for receiving migrants, a lack of legal aid and translation services and overcrowding in reception centres.
● We condemn the current immigration law which justifies racial profiling, perpetuates the existence of detention centres and hinders migrants’ regularisation process.

In the face of these deadly policies, we demand:

● A reparation and memorial process that brings justice to the victims of borders.
● That the dignity of all people, migrants and refugees, is respected.
● That express and fast-track deportations are stopped.
● That legal and safe routes are created so people can exercise their right to freedom of movement.
● That an imnmigration law that promotes and guarantees the rights of migrants and that doesn’t turn having a job into a requirement to grant residence permits is enacted.
● That a policy of safe visa issuance is created in the frame of the structural reform of the current inmigration law, so that migration is encouraged rather than fought against.
● That reception and hospitality lay the foundations of our society to promote relationships of equality.
We want a Europe that is open to diversity, which invests resources into receiving and regulating instead of controlling, arresting and deporting. We will keep on fighting until this becomes a reality.

Faced with their deadly policies: we remember, defend life and demand rights. 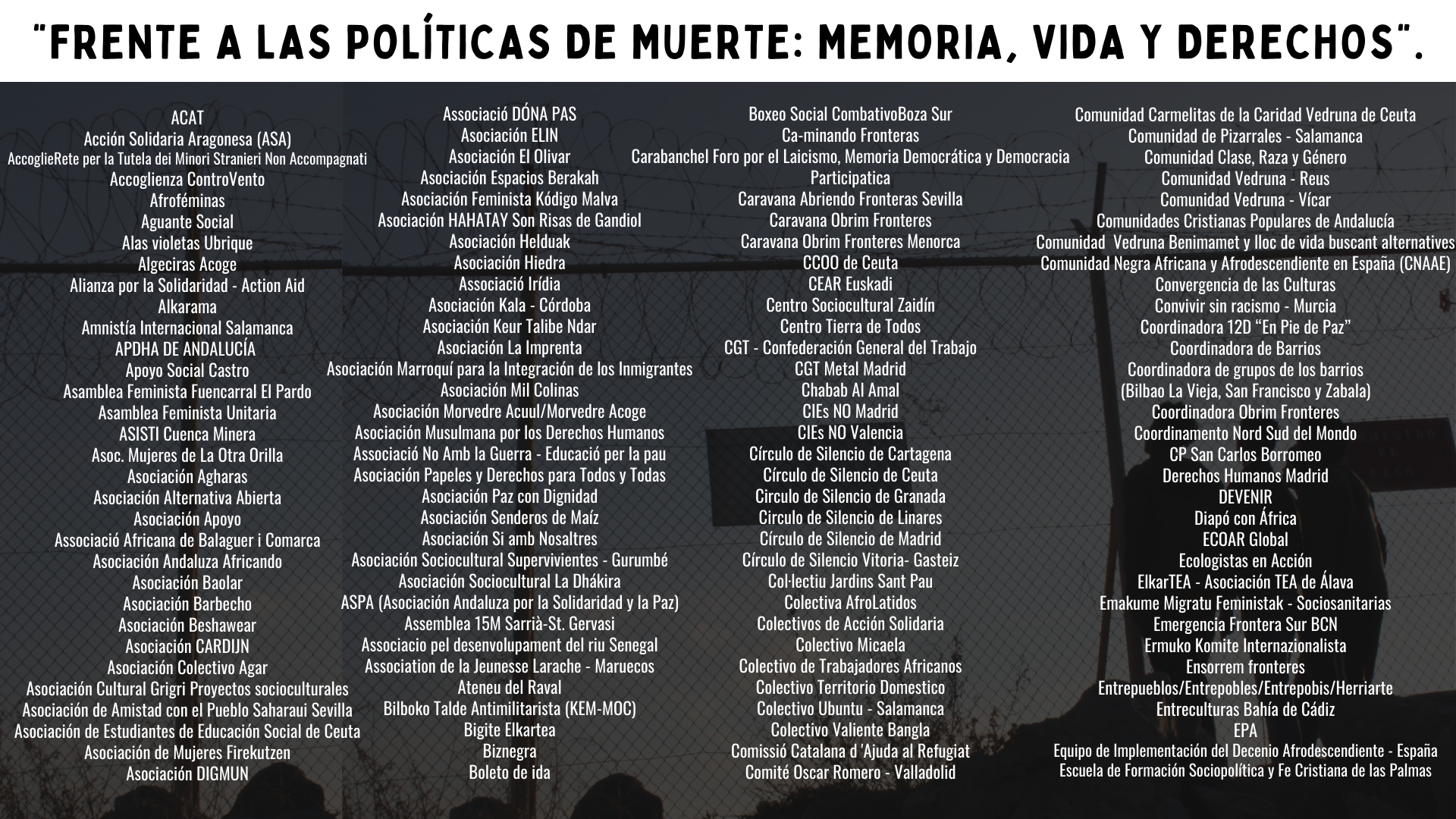 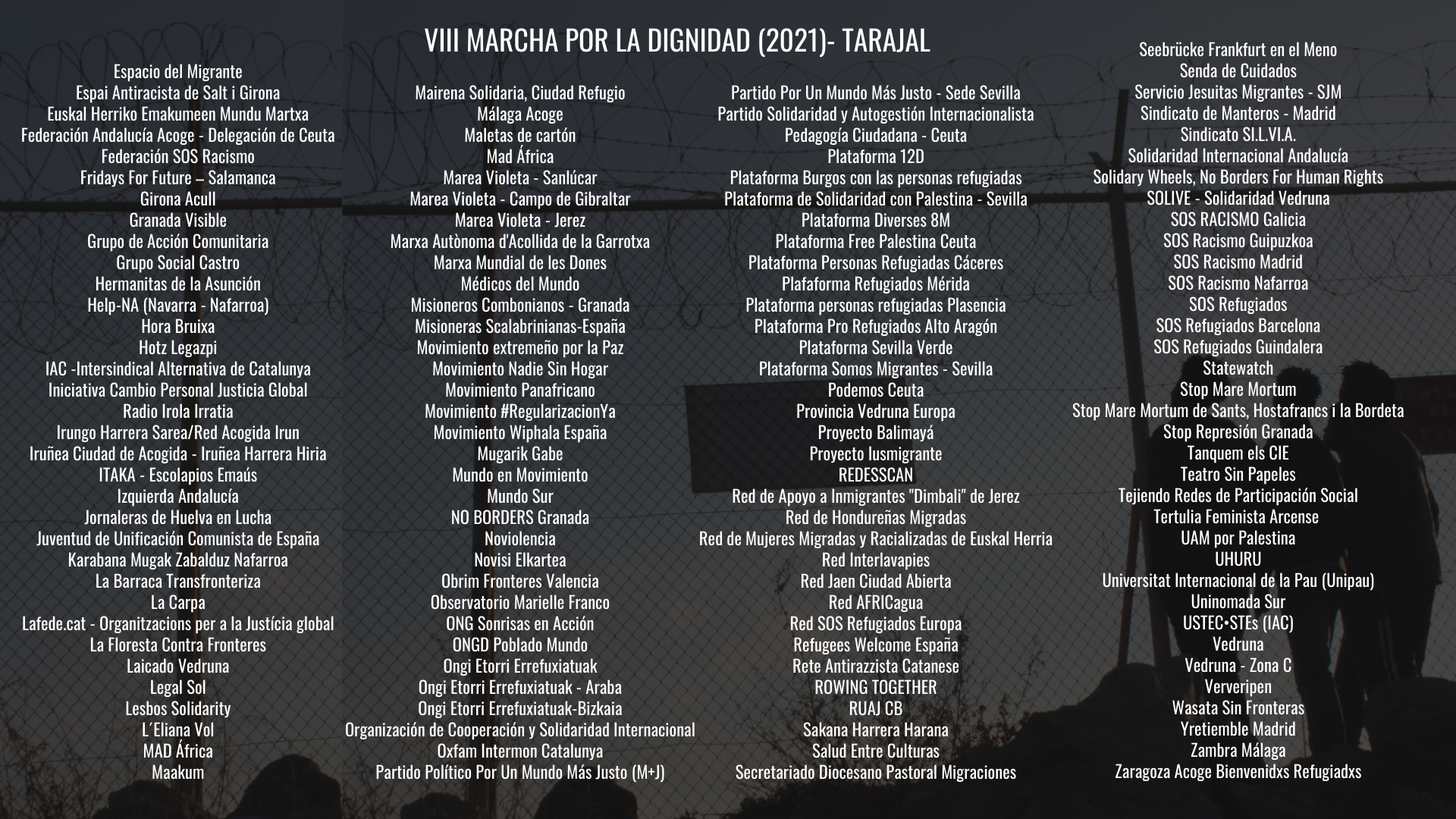