Frontex: Report on cooperation with third countries in 2019

The report gives an overview of Frontex's engagement with non-EU states during 2019 on issues such as surveillance, risk analysis and training. It was circulated to the European Commission, Council of the EU and European Parliament in June 2019. 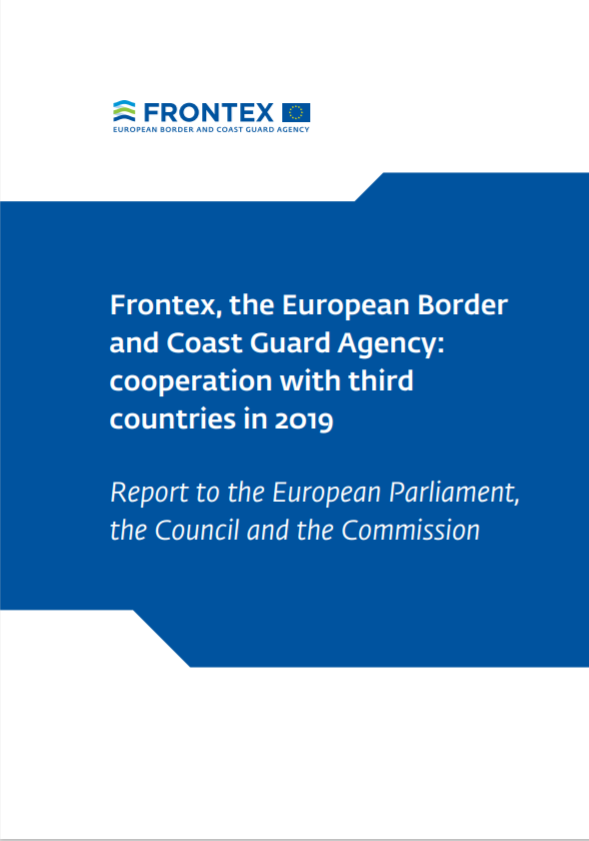 See: Frontex, the European Border and Coast Guard Agency: cooperation with third countries in 2019: Report to the European Parliament, the Council and the Commission (pdf)

All emphasis in the quotes below has been added.

"To use the momentum and to bring the Western Balkan authorities ever closer to the European border and coast guard family, in June the Agency for the first time organised a high-level meeting between the Frontex Management Board and the Chiefs of Western Balkan border authorities. This meeting was an opportunity for both sides to exchange views on common challenges, such as fights against cross-border crime and illegal immigration, and explore areas for even closer cooperation, particularly in view of the future implementation of the Status Agreements."

"Strengthening the dialogue with partners in North and West Africa is among the core priorities of the Agency’s international cooperation. In addition to the implementation of two capacity building projects... a number of familiarisation visits and high-level exchanges were held in 2019. Over the course of the year, Frontex Executive Director visited Morocco and Senegal."

"The Agency continued to further develop its network of Frontex Liaison Officers (FLO) in third countries, most notably, with the preparation of two new deployments - to Senegal and to the Western Balkans region... the FLO [in Albania] will reinforce the FLO based in Belgrade and will cover Albania, Kosovo and North Macedonia.

The FLOs to Turkey, Niger and the Western Balkans (main seat in Serbia) consolidated their presence in their respective countries or regions in support of the overall cooperation with the Agency, and contributed to the European Immigration Liaison Officers Network in their respective host country or region."

"Frontex has strived to identify synergies with and support EU-led initiatives in the external dimension... Strong involvement in EU efforts on return is also evident, such as participation in European Commission-led missions to third countries, as well as in all Joint Readmission Committee and Joint Working Group meetings. Reflecting the importance of a coherent EU approach towards the efficient implementation of the Union’s external policy on returns, the Agency continued the planned transfer of activities of return-related EUfunded networks and programmes, such as Eurint, EURLO and ERRIN, with a strong emphasis on building cooperation with third countries in the field of return from different angles."

"The Agency remained actively engaged in cooperation with the competent authorities of third countries in the area of situational awareness and monitoring, aiming at the further development of a common pre-frontier intelligence picture. Key components of collaboration in this area are the regional risk analysis networks with third countries: the Western Balkans Risk Analysis Network (WB-RAN), the Eastern Partnership Risk Analysis Network (EaP-RAN), the Turkey-Frontex Risk Analysis Network (TU-RAN) and the Africa-Frontex Intelligence Community (AFIC). After the work of this network had been temporarily suspended, discussions to resume TU-RAN activities have been carried-out throughout 2019."

"Cooperation through the Coordination Points as well as observer deployments from third countries in Frontex operations are closely interlinked and can reinforce each other. For example, in May 2019, in response to increased illegal immigration from Georgia towards EU and Schengen Associated countries’ airports, Frontex launched a dedicated Joint Activity with the Georgian and EU Member States’ authorities. In close coordination with the European Commission, Frontex deployed a team of EU Member State experts at Kutaisi Airport to advise the Georgian border management authorities on the requirements for entry to the Schengen Area. Targeted deployments of Georgian observers to the affected EU Member States and Schengen Associated countries’ airports were carried out in parallel, within the framework of Joint Operation Focal Points 2019 Air."

"Since 2016, Frontex has worked with INTERPOL to develop the FIELDS project (Frontex INTERPOL Electronic Library Document System), expected to be concluded by 2021. Once developed, the system will be available for national integration to all INTERPOL member countries via the INTERPOL’s I-24/7 global police communication network and will support front-line law enforcement officers in travel and ID document checks. The project is currently in the technical development and testing phase..."

"In 2019, Frontex continued to support Member States in the implementation of return decisions. In total, the Agency supported the return of 15.876 thirdcountry nationals (13% increase from 2018) to a total of 82 destination countries (see Map 1 and Figure 11). The majority of third country nationals were returned using charter flights, whereas a steadily increasing number of returns were also carried out by scheduled flights.

"In 2019, 80% of all Frontex-coordinated return operations by charter flights had at least one monitor on board, which is a 13% increase compared to 2018."

See also: No human rights monitoring for 20% of Frontex's deportation flights in 2019

"In 2019, the Agency continued to implement the project 'Strengthening of Africa Frontex Intelligence Community (AFIC) as an instrument to fight serious cross-border crimes affecting Africa and the EU'. In the framework of this project, Frontex opened four new Risk Analysis Cells, namely in Ghana, Nigeria, Senegal and The Gambia. Three Operational Guidelines for the Risk Analysis Cells were also created together with the AFIC national authorities of Ghana, Niger and The Gambia. Furthermore, a Risk Analysis Training Guide was developed in French and 80 analysts from 16 AFIC countries were trained in risk analysis and border management."

On the project 'Regional support to protection sensitive migration management in the Western Balkans and Turkey', the document notes:

"As part of the project, the Agency provides support in the establishment of National Coordination Centres in the Western Balkans, and supports the development of national registration systems with the view to facilitate in the future their eventual interoperability with EURODAC in the context of the EU accession."

"In view of EU accession prospects for the Western Balkan region, in addition to the technical assistance project, the Agency is also supporting partner authorities to develop ability to perform advance risk analysis on travellers, with a view to achieving future interoperability.

Based on the needs expressed by the partners, in 2019 Frontex organised two study visits on advance information to the Netherlands and Germany. These visits aimed to offer Western Balkans’ experts the opportunity to get hands-on experience on advance passenger information systems in the EU with a view to support the implementation of Advance Information systems at national level. Albania, Bosnia and Herzegovina, Kosovo* and North Macedonia, attended both visits whereas Serbia attended the second."

Supporting a training programme in a dictatorship

"Frontex continued to support the International Training Centre at the Egyptian Police Academy (ITEPA) - an EU-funded project led by Italy and Egypt set to deliver a series of trainings to border police officers from 22 African countries. In the maritime domain, two search and rescue workshops were organised with participation of Moroccan and Ukrainian observers."

See: Frontex, the European Border and Coast Guard Agency: cooperation with third countries in 2019: Report to the European Parliament, the Council and the Commission (pdf)

Support the fight for democracy and civil liberties in Europe