Step four: In the Schengen area

This report is available in PDF format here.

A traveller might be visiting the Schengen area for any number of reasons: a holiday in the Mediterranean; a business trip to Slovenia; seeing friends or relatives in the Netherlands; a wedding in Poland… Unless they are engaging in some kind of suspicious or unlawful activity, they should be free to enjoy their time as they wish. However, as has been widely documented over the years by civil rights organisations, we are not all equal before the law. Ethnic profiling by law enforcement officials means that people with darker skin are more likely to be targeted for identity checks and searches than their ‘white’ counterparts. Travellers with ethnic origins in Africa or the Middle East are particularly likely to come in for scrutiny.

As the Open Society Foundations have explained, police or other law enforcement officers “engage in ethnic profiling when they base their actions on ethnicity, race, religion, or national origin instead of an individual’s conduct or objective evidence,” which is illegal under both EU and international law. The organisation has documented widespread ethnic profiling in Bulgaria, France, Hungary and Spain;[1] the practice is also well-documented in the UK[2] and Germany,[3] amongst other places. This practice can just as easily take place at borders as it can within the territory of the EU, and while it is not limited to state officials, the power they wield means that ethnic profiling has particularly serious effects when it informs their work.

As noted earlier, in the years to come, the ‘identity data’ of non-EU nationals – names, date and place of birth, sex, travel document data, fingerprints and a photograph – will be extracted from five individual large-scale databases and stored in a new system called the Common Identity Repository (CIR). The purpose of the CIR is to facilitate police identity checks, by providing a common pool of biometric and biographic data on the vast majority of non-EU nationals present in the Schengen area. By encouraging an increase in identity checks, the introduction of the CIR will indirectly encourage an increase in ethnic profiling.

The VIS is already used for carrying out identity checks, and such usage has increased steadily over the years (see chart). National authorities responsible for checking “whether the conditions for entry to, stay or residence in the territory of the Member States are fulfilled,” can search the VIS using the visa number and/or an individual’s fingerprints. This can be done to verify their identity (to see whether the person in possession of the visa is the same person whose data is stored in the database) or to try to identify them (in cases where they are not in possession of a visa, but an official has reason to believe their data may be stored in the VIS). Similar legal provisions exist for the ETIAS and EES databases.

The rules on using the CIR for identity checks are far more permissive. There is no requirement for an official to be checking whether the conditions for being in the Schengen area are fulfilled. Instead, the database will be accessible when an individual does not have an identity document, when there are “doubts” about the identity data provided by an individual, the authenticity of an identity document or the identity of a document holder, or when a person is unable or refuses to cooperate. National law will govern these checks, with only very limited safeguards contained in the EU legislation itself. Any other actions taken by the authorities – for example searches, questioning, or detention – will also be governed by national law. 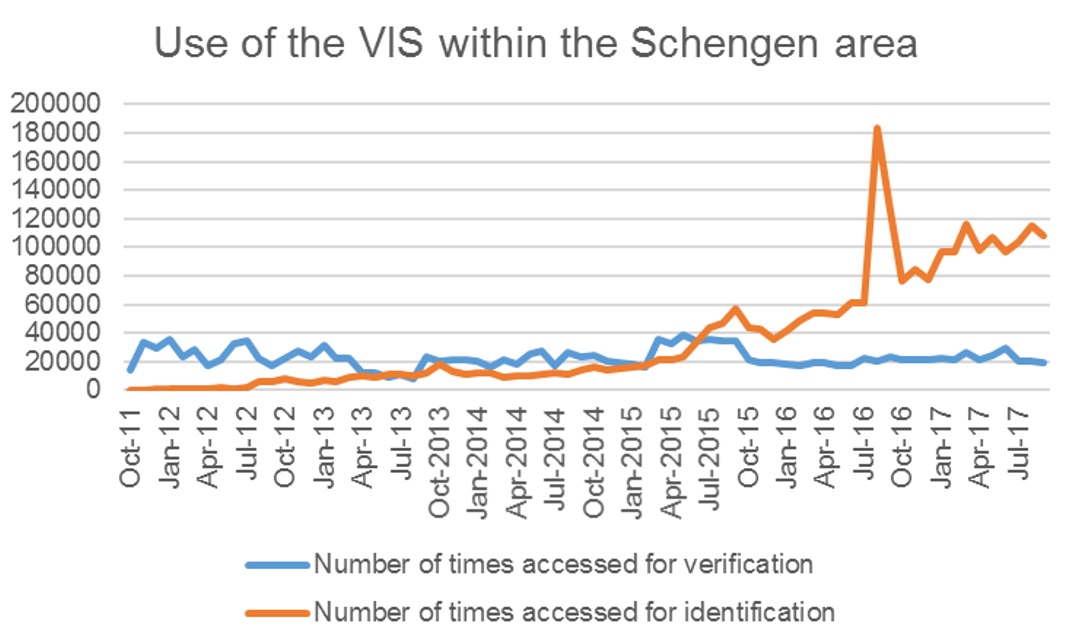 The use of the Visa Information System for verification and identification within the Schengen area. Source: eu-Lisa

[1] ‘Ethnic Profiling: What It Is and Why It Must End’, Open Society Foundations, https://www.opensocietyfoundations.org/explainers/ethnic-profiling-what-it-and-why-it-must-end