The Justice and Security Bill will allow ministers to force civil courts to hear evidence in secret if they believe it to be in the interest of national security. Verdicts will be reached on the basis of evidence that litigants and their lawyers have neither heard nor been given the opportunity to rebut.

Netherlands: Increased use of firearms by Dutch police by Kees Hudig

Police in the Netherlands are increasingly drawing, and using, their firearms. This practice is being actively encouraged by police chiefs and the development has not been substantially criticised in the media. Other forms of police abuse are also on the rise. Since many police monitoring groups have ceased to function, there has been little public outcry at the situation.

Europe’s anti-terror regimen is reshaping European society and has led to a distorted and discriminatory approach to criminal justice. Those who speak out against the erosion of democratic standards and the unfair treatment of Muslims are increasingly being targeted and penalised by the state.

The jury condemned a catalogue of police failings and refuted the findings of the Independent Police Complaints Authority. The circumstances of Rigg's death highlight the disproportionate treatment of black people by police and the difficulty of holding officers accountable for their actions.

This article provides an overview of the plight of refugees and migrants in Britain. This includes the devastating impact of legal aid cuts, the conditions of immigration detention, the growth of Islamophobia and the exploitation of undocumented migrants.

The Global Approach to Migration and Mobility: the state of play by Marie Martin

GAMM has been promoted by the Commission as an "overarching framework of the EU external migration policy" but many member states remain sceptical of the value of dealing with migration issues at EU level. The approach has been much criticised for allowing member states to use migrants as disposable workers and for further restricting access to the EU.

EU: The democratic accountability of the EU’s legislative procedures by Steve Peers

The EU legislative process lacks the basic rudiments of openness and transparency and gives civil society and national parliaments little time to react to agreements made by the Council and European Parliament. This article suggests a revised Inter-Institutional Agreement to address these concerns.

This article details the key findings of Europol's recent report which shows a significant decrease in terrorist incidents between 2009 and 2011. The report looks to find ways to justify anti-terrorism initiatives that are already underway and is largely unquestioning of law enforcement activities. The lack of recent activity from established threats such as Al Qaeda and ETA has led anti-terrorist policing to increasingly focus on left-wing, anarchist and single issue groups.

Frontex has been negotiating in secret to grant state agencies greater access to the personal data of travellers entering the EU. No hard evidence has been presented by EU institutions to support Frontex's claim that this will lead to more effective border management and critics have warned that the mandatory collection of passenger information is entirely unnecessary and a disproportionate infringement of individual privacy.

* In addition, the journal carries a round-up of new books, reports and publications 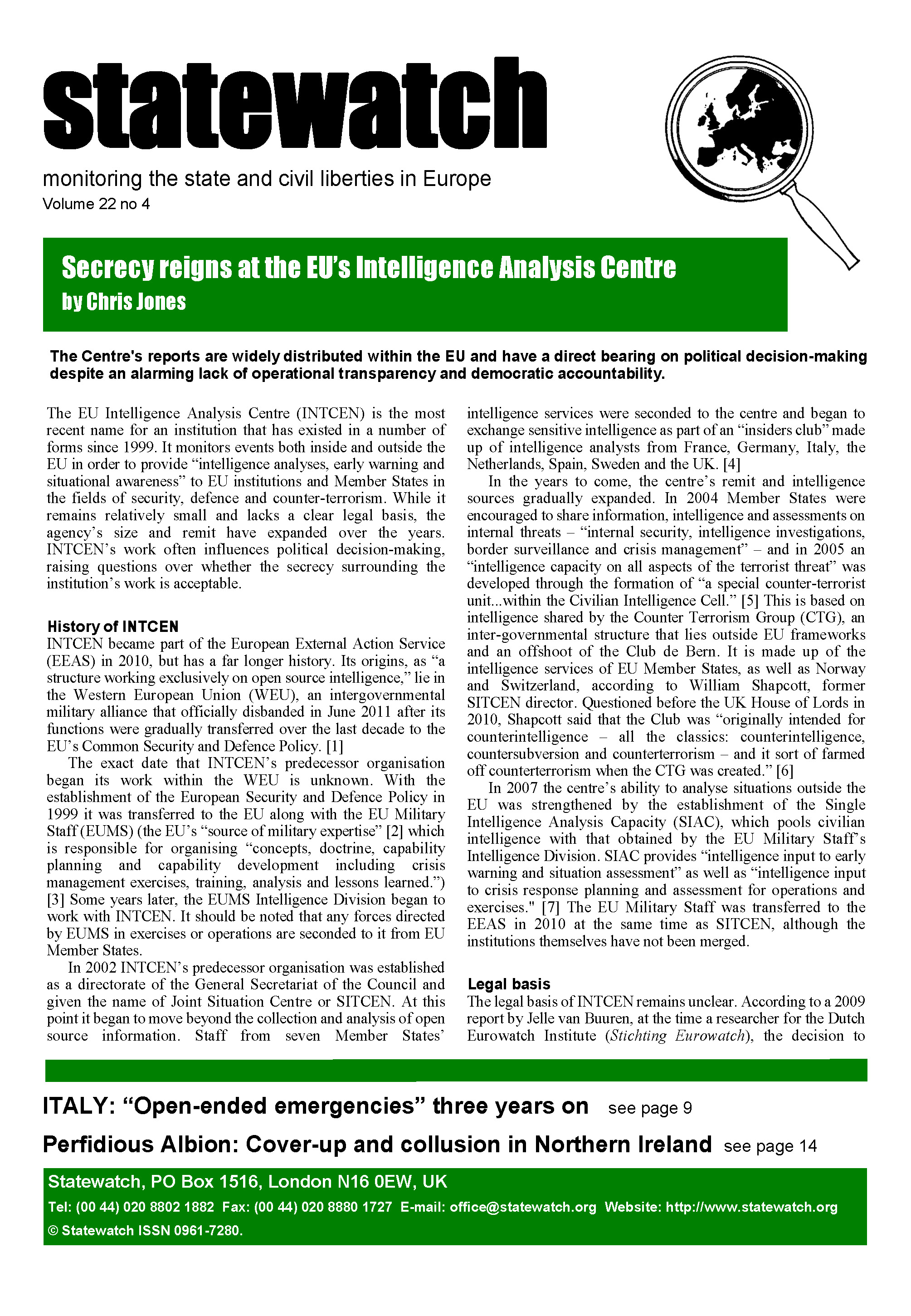 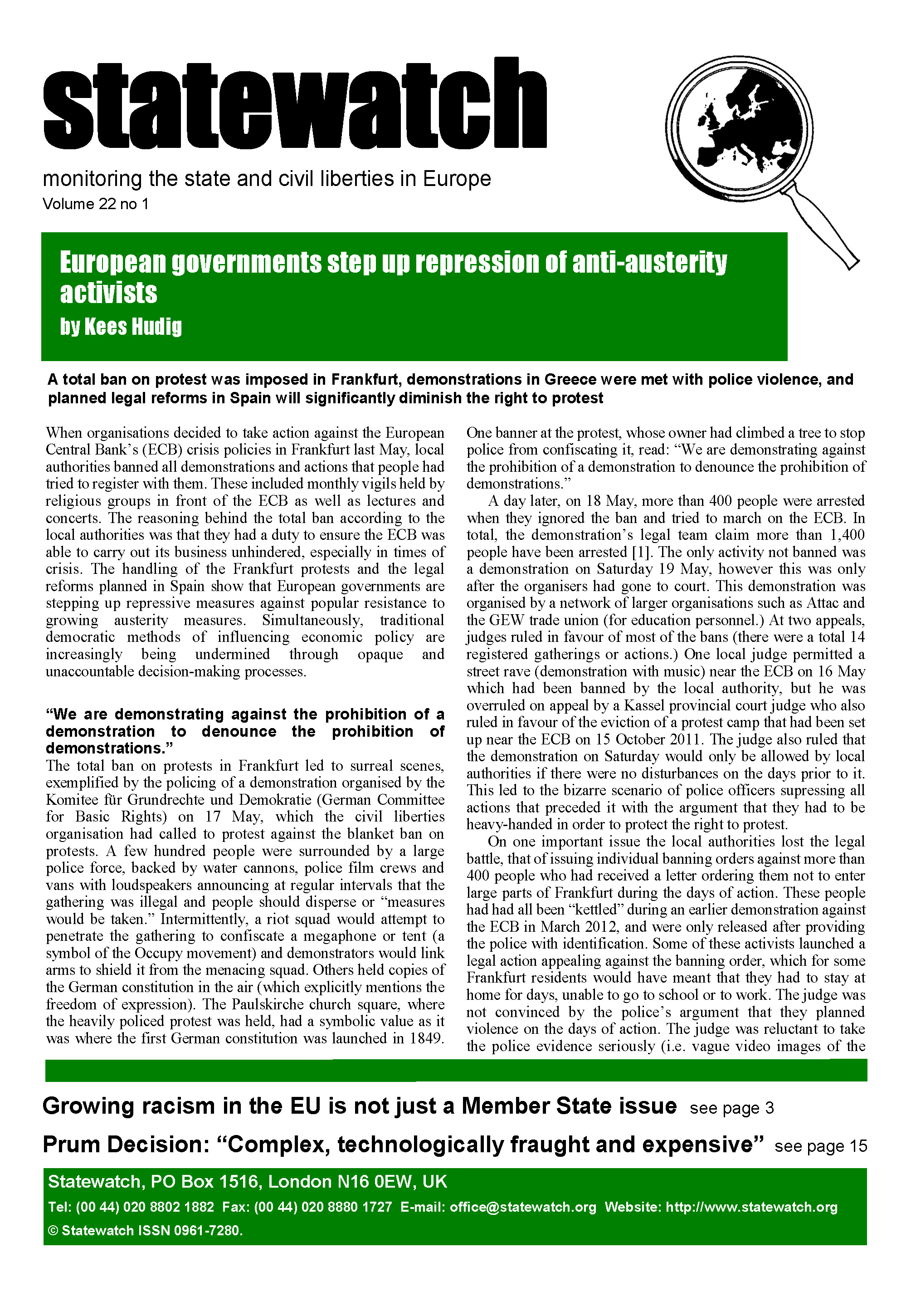