The Reclaim Your Face campaign has launched a European Citizens' Initiative calling for a ban on biometric mass surveillance, for example through the public deployment of facial recognition technologies. If the petition gets at least one million signatures from seven EU member states, the European Commission will be obliged to respond to the campaign's demands, and the European Parliament will have to debate the topic.

The article below was originally published by Reclaim Your Face.

The Reclaim Your Face coalition launches a European Citizens’ Initiative (ECI) today to ban biometric mass surveillance. The ECI represents the voice of those who oppose a dystopian future and instead want a future in which choices are made by us, not by algorithms. The initiative needs to collect 1 million signatures in at least 7 EU countries during the next year.

As the European Commission is preparing new laws on Artificial Intelligence, a growing coalition of digital and human rights organisations led by European Digital Rights (EDRi) warns of the many dangers of biometric mass surveillance on our freedom and dignity. The Reclaim Your Face coalition is demanding a ban on the use of harmful AI such as biometric mass surveillance by launching a European Citizens’ Initiative (ECI) today. The ECI is a unique tool the EU puts at the disposal of European citizens to organise and collectively demand new legislative frameworks.

Biometric data are data about our bodies and behaviours, which can divulge sensitive information about who we are. For example, our faces can be used for facial recognition to make a prediction or assessment about us – and so can our eyes, veins, voices, the way we walk or type on a keyboard, and much more.

Governments, police forces and corporations are using recording devices (like CCTV cameras) and facial recognition software to gather our unique biometric data. They track us by using our unique characteristics in order to permanently identify each of us. The blanket capture of every person’s biometric data in public spaces like parks, train stations and shops simply for trying to live our lives is biometric mass surveillance.

“Biometric mass surveillance brings “Internet-style” omnipresent tracking to the offline world. This would eradicate the few remaining refuges of privacy.”

The processing of any biometric data is already prohibited the EU. However, EU law allows some very problematic exceptions to this general prohibition. Powerful actors take advantage of this legal confusion by introducing – outside of democratic oversight – these harmful technologies in our public spaces, dehumanising and treating us all as walking barcodes.

“Europeans have a proud and diverse history of rising up against injustice: the fight for universal suffrage, the Solidarność (Solidarity) workers’ movement, and so much more. Today, we launch a 1-million person petition that asks the EU to protect everyone from the harms of facial recognition and other biometric mass surveillance. By doing this, the Reclaim Your Face campaign fights for a future where people can live freely, express, think and organise without fear.”

The ECI represents the voice of those who oppose a dystopian future and instead want a future in which choices are made by us, not by algorithms, in which our bodies belong to us, in which we are not discriminated against based on how we look, how much money we have, or where we are from, and in which we have equity and justice.

The ECI needs to collect 1 million signatures in at least 7 EU countries during the next year. Succeeding will oblige the European Commission to respond to our formal demand for a new law and open a debate among the Members of the European Parliament.

This is a truly unique opportunity for all EU citizens to request a law that protects them by outlawing biometric surveillance practices in public spaces. A ban is our only hope to prevent harms that arise with the identification and judgment of people based on their face, body, features and behaviour.

European citizens have a historical chance to stop the harm before biometric mass surveillance becomes permanent in our society.

Greece: Ongoing impunity for rights violations at the borders is "inhuman" 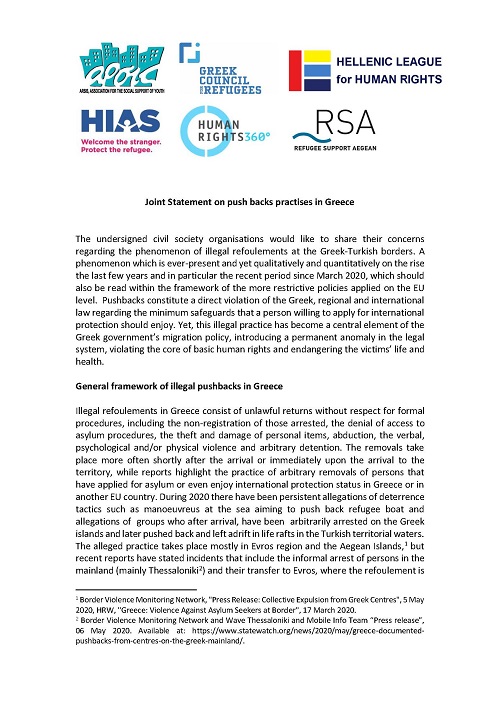