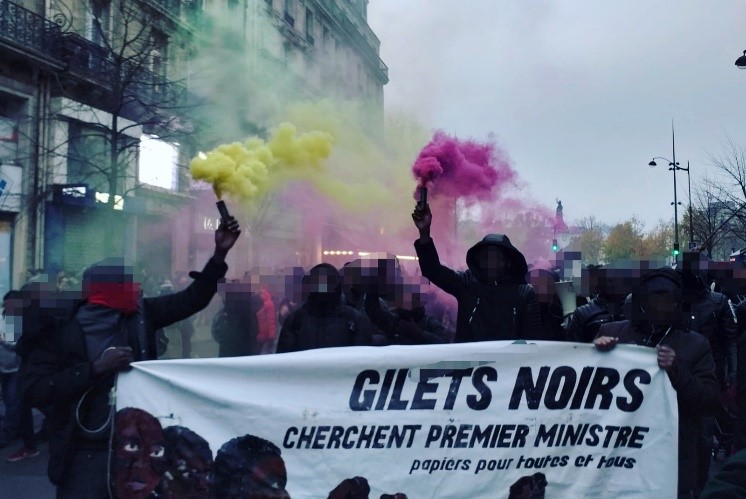 In May 2019, several hundred people occupied part of the Charles de Gaulle airport in Paris. They were to make demands: that Air France cease assisting with deportations and stop hounding staff who refused to embark would-be deportees. Their fundamental demand, however, was “documents for all!”[1]

They made this demand because they have no residence documents – as sans-papiers, the French state wishes to deport them. It aims to do so through a system that the protesters condemned for treating “non-white lives and their management as flows”[2] – nothing more than a homogenous mass to be corralled and controlled.

The demands made by the Gilets Noirs (Black Vests, as the protesters refer to themselves) do not just confront the French state, but an EU-wide immigration enforcement system that in recent years has set its sights squarely on less immigration and more enforcement. In the last decade over two million people have been deported from the EU, the vast majority of them through forced removals.[3]

This number, although enormous, represents less than half of the almost-five million people issued removal orders by EU member states since 2009.[4] A variety of new measures aim to make up the difference. Were this system to function as intended, groups like the Gilets Noirs would not have the opportunity to organise and express their demands – they would be subject to “swift, sustainable and effective return using a common EU approach”.[5] But their protests – and the countless other demonstrations and campaigns organised by undocumented people and their supporters across the EU and beyond[6] – raise serious questions that must be addressed in an age of global migration, rampant inequality, political uncertainty and worsening climate change.

Deportation is an inherent site of social, political and legal conflict that affects individuals in a wide variety of different situations – those who have stayed longer than their visa permits, those who have had asylum claims rejected, those who have entered a state’s territory without permission, and so on. However, the focus by EU and national politicians and officials on the statistics related to removals plays into a ‘numbers game’ with “little contextual or practical relevance,” leading to increasingly outlandish proposals designed to ensure that an increasing number of people are deported, or prevented from arriving in the first place.[7]

The number of deportations in which the EU is involved in one way or another – whether through law, policy, funding or operational activity – has grown significantly in the last two decades, and particularly swiftly in recent years. In 2015, the journalists’ consortium The Migrants Files estimated that since the year 2000, the EU and its member states had spent at least €11.3 billion on deportations.[8] The next EU budget is likely to provide ample funding for forced removals. While its exact size is yet to be determined, the European Commission’s proposal for the 2021-27 Asylum and Migration Fund puts particular emphasis on “promoting effective returns”.[9]

The number of people removed on flights coordinated or financed by Frontex, the EU’s border agency, tripled from some 3,600 in 2015, to almost 10,500 in 2016, when a new legal regime governing the agency came into force. Ultimately, the goal is to give the agency a central role in the enforcement of expulsion orders and significant work is going into developing the necessary legal regime, systems and procedures. In the words of a Frontex training presentation: “Politics and airlines have to be convinced of the professionalization of the product: “Removal”, national and international = FRONTEX.”[10] The goal is to have Frontex carry out the deportation of at least 50,000 people annually from 2024 onwards.

This report provides a critical examination of a number of the measures implemented or proposed by the EU in recent years: proposed changes to the law governing standards and procedures for deportations; the transformation of policing and migration databases into systems designed to better-assist with forced removals; and the growth and development of Frontex, the EU’s border agency, into an all-round border control, surveillance and deportation agency, for which a revamped legal basis came into force in late 2019.

Those in favour of these new measures insist that they ensure full protection of the fundamental rights that are supposed to underpin European society. A closer examination casts serious doubt on this assertion. New and proposed measures seek to massively expand the use of detention and limit access to judicial remedies; they introduce exemptions to data protection rights that could be crucial for challenging wrongful removals; they will step up the use of entry bans (‘get out and stay out’); and they are creating new and ‘multi-purpose’ information systems, expanding the possibilities for surveillance and discriminatory profiling, despite concerns over the necessity and proportionality of expanding existing databases and setting up new ones.[11]

These changes will further weaken legal protections for people in an already-precarious situation. They will also require massive public expenditure on technology, infrastructure and personnel; the strengthening and expansion of state and supranational agencies already-lacking in transparency and democratic accountability; and they are likely to further undermine claims that the EU occupies the moral high ground in its treatment of migrants.

The desirability and feasibility of this project must be called into question. In self-declared liberal democratic states anchored in respect for human rights and the rule of law, the power to deport individuals should be used sparingly and with intense oversight, when it must be used at all. It has inherent risks for human rights and can have irreversible negative consequences for the individuals affected. Even if the removal of an individual from a state’s territory can be justified, there are a vast array of less harmful measures available than detention and forced expulsion.[12] Anti-deportation campaigns also often raise broader questions of justice regarding the treatment of foreign nationals, who are frequently citizens of Europe’s former colonies – a can of worms on which many people would prefer to keep the lid tightly shut.[13]

This report examines the deportation machinery being constructed by the EU so that its workings and the risks it poses may be better understood. Deliberate attempts to water down protections for individuals and to increase the powers of state agencies equipped with coercive powers should be of concern to everybody who wishes to defend a free and just society.

[8] See ‘The high costs of deportation’, The Migrants Files, http://www.themigrantsfiles.com/

[11] Article 5(1)(b) of the General Data Protection Regulation: personal data must be “collected for specified, explicit and legitimate purposes and not further processed in a manner that is incompatible with those purposes”.

[13] The statement issued by the Gilet Noirs during their occupation of the airport also said: “For some Roissy Charles de Gaulle is a place for travel and consumption. Those for whom this comes easy are a minority coming from the bourgeois and/or white worlds. It’s this world that colonizes and wages war. The entrance to their fortress is the airport. It is well guarded by the military, police and cameras… In this place we also meet many of our own. Nevertheless, we don’t want to see ourselves here.”