From the editorial: "So detached has the official rhetoric about migrants' rights and saving lives become from the realities of the detention centres, the razor wire, the intensive surveillance, the military patrols, the forced expulsions and the 20,000 documented deaths, that people bearing the brunt of the economic crisis and austerity measures may be forgiven for thinking that over-generous migration policies are indeed the source of all their woe - a message that is rammed home by opportunist politicians and xenophobic media at every opportunity.

"This new edition of the Statewatch Journal examines the latest European policy and practice vis-a-vis border control, immigration and asylum."

The cradle or the grave? EU migration policy and human rights by Frances Webber

EU migration policy is ever more firmly anchored in the imperative of exclusion, causing the deaths of thousands at its borders and subjecting migrants to "institutionalised detention". This quasi-criminal framework for migration empties of meaning the ideals on which the EU claims to be founded.

"We want to welcome the living, not the dead" by Matt Carr

In the aftermath of tragedies involving migrant deaths at sea, the moral outrage directed at 'people smugglers' by politicians is steeped in bad faith, if not outright hypocrisy. Europe needs to abandon an essentially repressive and exclusionary approach to border enforcement which aims to make migrant journeys as harsh and as difficult as possible.

The European Commission claims Eurosur's surveillance tools will help save lives at sea, but it is unclear whether the system can accurately detect the small boats migrants use and there is no mechanism to force Member States or Frontex to initiate search and rescue operations should a vessel in distress be located.

Frontex and fundamental rights: a love story? by Leila Giannetto

The European agency in charge of the management of the EU's external borders, Frontex, is facing harsh criticism for its lack of accountability in the field of migrants' rights protection.

The EU is aiming to increase and formalise operational cooperation amongst law enforcement authorities, with significant effort going into organising and carrying out joint police operations targeting irregular migrants.

Jimmy Mubenga died while being restrained by Detention Custody Officers working for the private security firm, G4S. The coroner heavily criticised the company's operational practices and identified a culture of racism endemic at G4S and other companies to which immigration functions are outsourced.

Refugee protests in Europe: fighting for the right to stay by Katrin McGuaran and Kees Hudig

Over the past eighteen months, well-organised, sustained protests have generated widespread publicity of human rights violations suffered by refugees and undocumented migrants living in the EU. 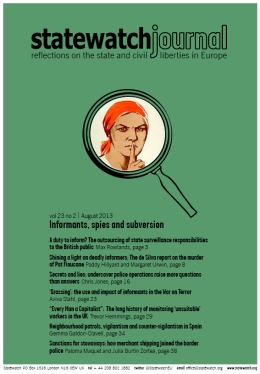