The Reform Treaty agreed by EU governments in Lisbon on 17- 18 October is to be formally "signed-off" by the Council in December.

On 8 October around 5,000 people defied an attempt to ban a weekday march by the Stop the War Coalition calling for the withdrawal of British troops from Iraq.

Germany's new Immigration Amendment Act, which came into force on 28 August this year, was received by migrant communities and asylum rights associations with sustained criticism.

A planned three-week tour to Britain by the Palestinian Under-19 football squad was stopped in its tracks in August when the British consulate in Jerusalem refused to grant visas to the entire team.

Campaigners welcomed the escape of detainees imprisoned at the Campsfield House Immigration Detention Centre, Oxford, at the beginning of August. Twenty-six prisoners fled following a week of strikes and protests at the "appalling" and unsafe living conditions at the detention centre.

Now that the idea of public-private financing for the European satellite radio navigation programme Galileo has been abandoned in view of lack of interest of the industry, the military goal of the project is more openly emphasized.

According to the human rights organisations Oxfam, Amnesty International, Human Rights Watch and Landmine Action, the UK, the world's third largest user of lethal cluster bombs over the last ten years, has renamed one of its two remaining cluster munitions in an effort to beat an expected worldwide ban next year.

France has made a series of proposals aimed at a return to the military organization of Nato. The country had left the military branch of Nato in 1966 under general De Gaulle because it mistrusted the US nuclear guarantee for the defence of continental Europe. Since then France stayed only in the political organization of Nato. Now new president Sarkozy has sent a document to the alliance's political headquarters in which four ways of sharing information and strategic thinking between Nato and the EU common foreign and defence policy are mentioned.

At 5am on the morning of 20 July 2007, Russian neo-nazis attacked an anti-nuclear protest camp in Angarsk in Siberia, killing the anarchist and anti-fascist activist, Ilya Borodayenko, and seriously injuring several others

On 9 August, the Munich public prosecution ended criminal investigations against four of the 17 journalists accused of "breaching secrecy" by publishing information contained in classified documents from the parliamentary investigation committee examining Germany's involvement the US-led "war on terror".

On 9 May, as Tony Blair resigned as Prime Minister, David Keogh, and Leo O'Connor were jailed for breaching the Official Secrets Act (OSA) by attempting to leak an "extremely sensitive" four-page memo that purportedly disclosed British concerns at US military tactics following the 2004 US massacre of hundreds of civilians in Fallujah and the military use - initially denied - of white phosphorus as a weapon of war.

In May 2005 families banished from their homes on the Chagos Islands 30 years ago to make way for a US military base won their legal battle to return home.

In August the Independent Police Complaints Commission (IPCC) said that the eight police officers involved in the restraint related death of Roger Sylvester should not face any disciplinery action.

Amnesty International has expressed "grave concern" at the ever widening deployment of the Taser, the so-called "less-lethal" weapon that was described as a "dangerous weapon" by the former-Home Office minister, Hazel Blears. Use of the Taser electro-shock gun, which has resulted in hundreds of deaths in the USA, had been confined to specialist firearms officers until their deployment to ten police forces in the UK which are participating in a year-long trial that began on 1 September.

UK: HMP Foston Hall still to "come to terms with its new role"

A follow-up inspection by the Prisons Inspectorate at HMP Foston Hall took place following changes in the womens' estate, which meant that Foston Hall become a local womens' prison, having been previously a training prison for sentenced women, with a relatively settled population.

This was the Inspectorate's third inspection of HMP Rye Hill, a contracted-out Category B prison, run by Global Solutions Ltd (GSL), that opened in January 2001. In 2005, the Inspectorate reported that Rye Hill was "an unstable environment, both for prisoners and staff."

A campaign of threats and attacks on Muslim prisoners has resulted in a serious assault on Esa (Dhiren) Barot at HMP Frankland.

Over recent years, political opposition and investigative journalism have come under attack by police and the security services in Germany.

EU Reform Treaty: The rhetoric of transparency and public debate in the EU

One of the main victims of the failure of the Constitutional Treaty on the EU and its replacement by the new 'Basic Treaty" is transparency and its counter-part public debate. 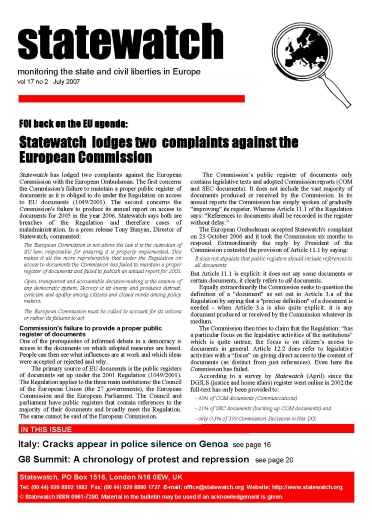