UK: MI6 kept quiet about 'criminality' of agent with ‘licence to kill’

The UK's foreign intelligence agency, MI6 (officially known as the Secret Intelligence Service, SIS) was running an overseas agent authorised to engage in serious criminality who had "probably" crossed some of the "red lines" set out by MI6 with regard to criminal activities. However, the agency failed to make this clear to the foreign secretary - who is responsible for authorising such operations - until it was pointed out by the Investigatory Powers Commissioner, an oversight body tasked with monitoring the surveillance and spying powers of the UK's policing and intelligence agencies.

See: MI6 kept quiet about 'criminality' of agent with ‘licence to kill’ (The Guardian, link):

"MI6 failed to make clear to the foreign secretary that a “high risk agent” operating overseas had probably engaged in “serious criminality” until it was pointed out by an independent regulator last year.

The spy agency was asking the minister – either Dominic Raab or his predecessor, Jeremy Hunt – to renew authorisation of the agent’s activities despite the apparent criminality without being “expressly clear” as to what had happened.

Six months previously the agent, likely to be an undercover informant, had been sent some “red lines” by MI6. The agent was told if they were breached, it would “result in the termination” of the informant’s relationship with the spy agency.

But when renewal of the agent’s authorisation was sought from the foreign secretary, MI6 “did not make expressly clear” that the “‘red lines’ had probably been crossed” – until the ambiguity was noted by the Investigatory Powers Commissioner (Ipco)."

See the section 'Overseas inspections', pp.57-8 of the Annual Report of the Investigatory Powers Commissioner 2019 (pdf), which includes the following:

"SIS [the Secret Intelligence Service, MI6] set out a number of indicators that the agent may have been involved in, or have contemplated, the serious criminality referenced above. We concluded that, on the basis of this new information, SIS’s ‘red lines’ had most likely been breached, but the renewal submission failed to make this clear. Whilst the submission referred to SIS’s ‘red lines’ provided information about criminality that may have occurred and noted an increased risk in the case, it did not make expressly clear that SIS’s ‘red lines’ had probably been crossed. We concluded that the renewal did not provide a comprehensive overview of available information which we believe would have provided the Secretary of State with a fuller and more balanced picture. SIS immediately responded to these concerns by updating the FCO."

The report looks at the activities of MI5, MI6, GCHQ, the Ministry of Defence, law enforcement agencies and the police, other public authorities, local authorities, prisons and more. It covers issues such as equipment interference (hacking) and the acquisition of communications data, although never in significant detail.

The report includes a set of statistics about the use of different types of powers (p.141): 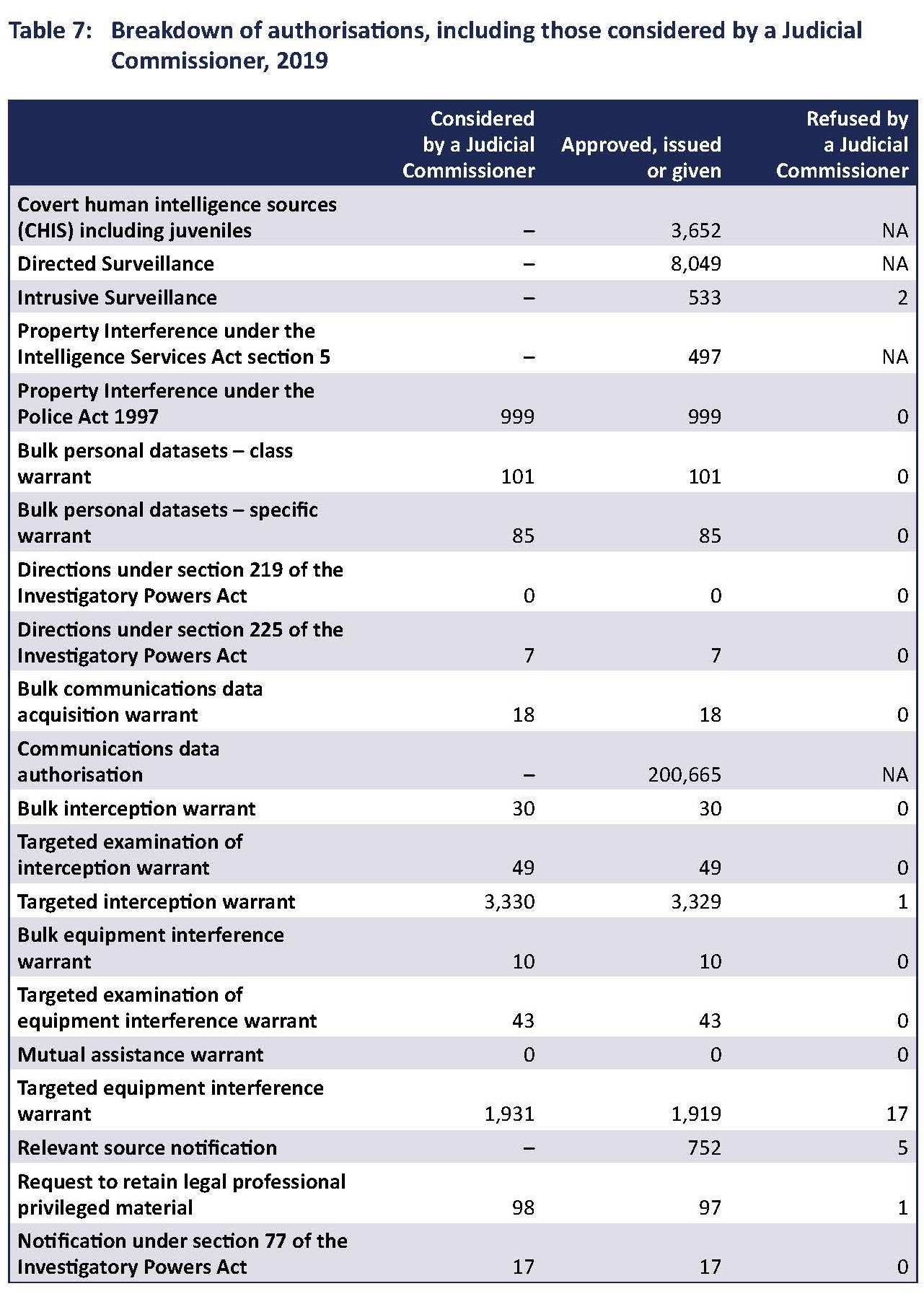 Contents of the report:

Biosecurity research and development by the military and for health security purposes: a literature review